Podiums for Buildbase Suzuki at Thruxton 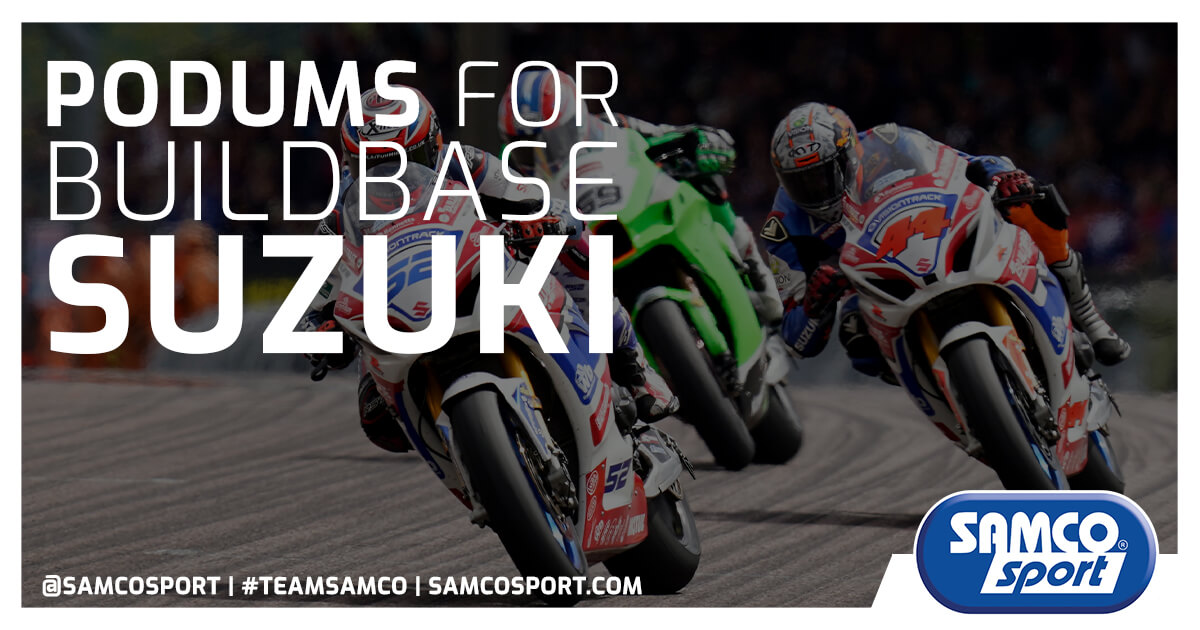 Podiums for Buildbase Suzuki at Thruxton

Danny Kent and Luke Stapleford ensured Buildbase Suzuki picked up three podium finishes from the fourth round of the Bennetts British Superbike Championship at Thruxton, with Kent taking a third place aboard his GSX-R1000R superbike, while Stapleford collected two runner-up finishes in the National Superstock 1000 races. 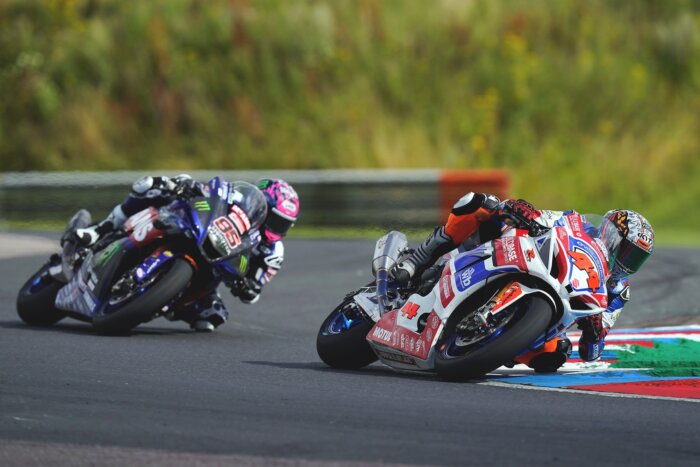 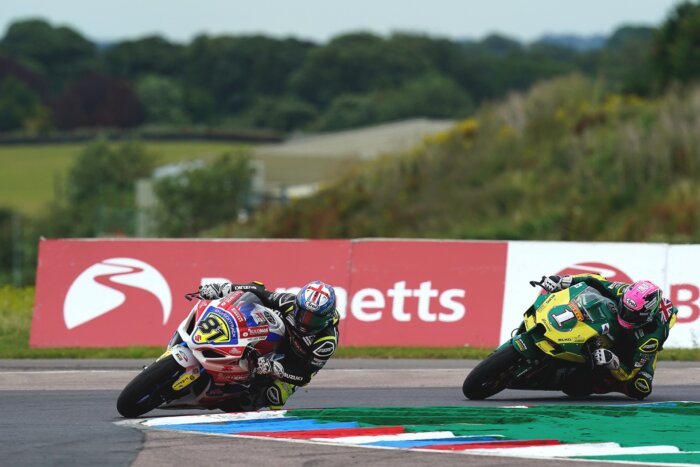 Kent enjoyed his best weekend’s racing aboard a superbike, and in race three’s changeable conditions he put together a controlled performance to push through the field to third. From there he set about catching the leading duo and was closing in but ultimately ran out of laps to advance any further. However, third meant he took his first podium finish on a superbike.

The result came after his previous career-best finish in Saturday’s Bike Social sprint race, where he finished sixth. He finished ninth in race two, but took two long lap penalties after confusion following a cutting of the chicane. 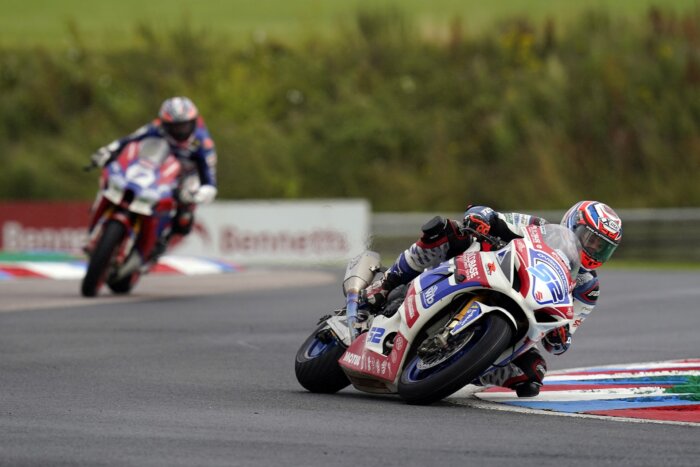 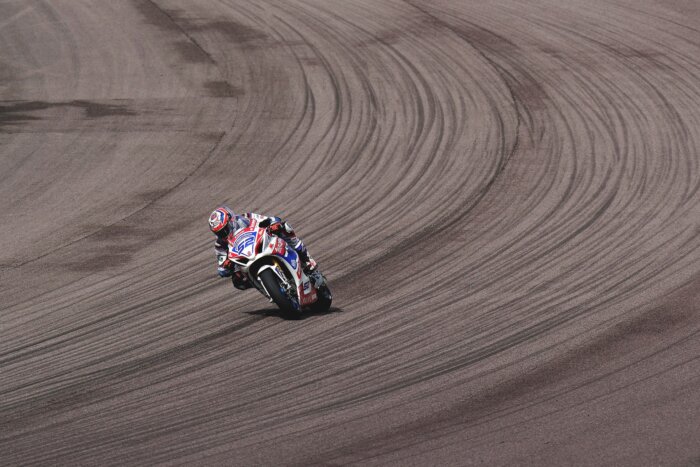 ’m really happy with the podium, and really the whole weekend, and it’s great to be able to repay the team for all of the hard work they’ve been putting in. I enjoyed Thruxton when I last came here and I made it through to Q2 then, so I was hopeful of going well, coming back on a better package, and I felt good from the first dry session. We also made positive steps and Brands Hatch even though the results weren’t there, so we were confident coming into the weekend.

“In that last race I got into third and was able to click off some fast laps and was catching the two in front, and the gap to Danny [Buchan] starting the last lap was under a second, but I thought, at that point, with a couple of seconds behind me, to just take the guaranteed podium. It would have been very easy to make a mistake, in those conditions, especially.

“I was happy with the sixth in race one, and in race two I was in a good position again but I had been struggling a bit in sector three. I got a better run than usual out of Church – and you could see it on the data – which meant I arrived at the chicane that bit faster, and it was a typical Thruxton out-braking yourself scenario. They held the long lap penalty board out and I did it but it was under a yellow flag, and they kept the board out. Rather than risk it I did it again, but after doing the first in about sixth or seventh, I ended up about 14th, so to get back to ninth was good. It’s one of those things.

“Donington next should suit me and the bike, confidence is high after getting the podium, I’m already looking forward to getting going.” 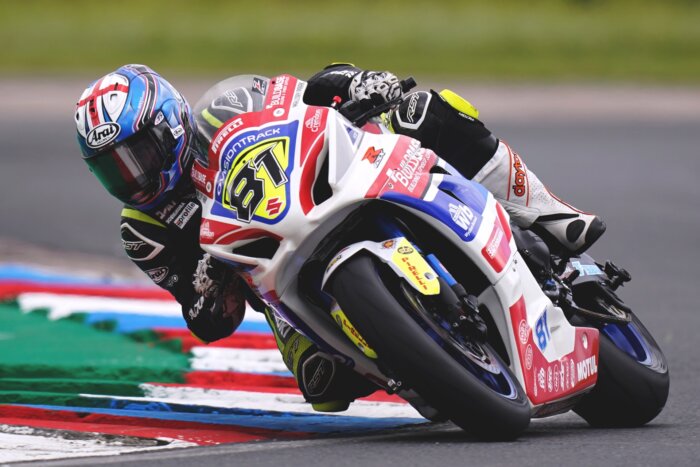 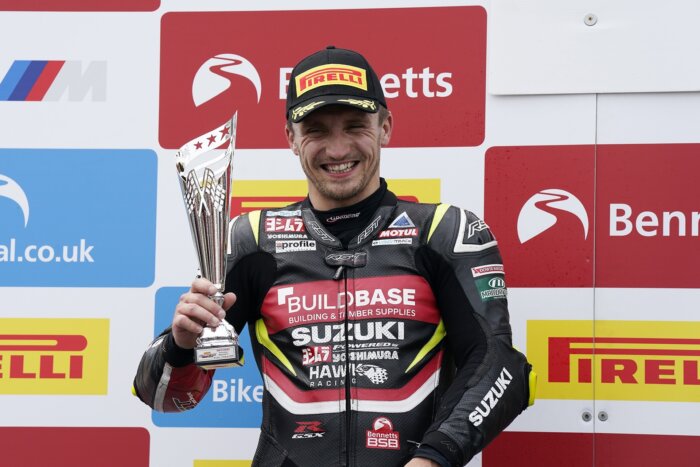 Stapleford enjoyed a successful return to British championship racing, rejoining the Buildbase Suzuki team to deputise for the injured Tim Neave. He qualified the superstock-spec GSX-R1000R on pole position, before racing to two second places. In both races he found himself outside of the top six in the early laps, but he was able to cut through to fight for the win in the closing stages. In race two he had a gap to bridge to the leader with just two laps to go. Able to get across it, it all came down to the final chicane, but a defensive move by the leader meant he was unable to get around the outside and was forced to settle for another runner-up spot.

Luke Stapleford, “It’s in unfortunate circumstances that I was here this weekend, and I hope Tim recovers quickly. I enjoyed myself though. I’d done a bit of riding at the start of the year and always kept in touch with Steve, with a view to maybe doing one or two rounds and Thruxton was actually one of the rounds I’d had my eye on; I’ve always been comfortable around here. I was used to the superstock Suzuki coming into the weekend having had one as a practice bike; it’s a bike you can just get on and ride, it doesn’t excel in anyone area, it’s not the best at one thing but it’s good at everything, so it was easy to get on and go fast on.

“The races were good. I hadn’t set a specific target for the weekend, but I said I wanted to be in amongst it, so to qualify on pole and take two podiums, I’m happy.” 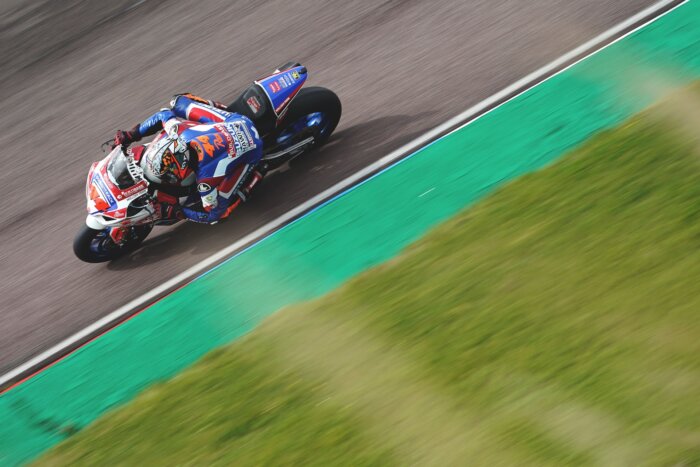 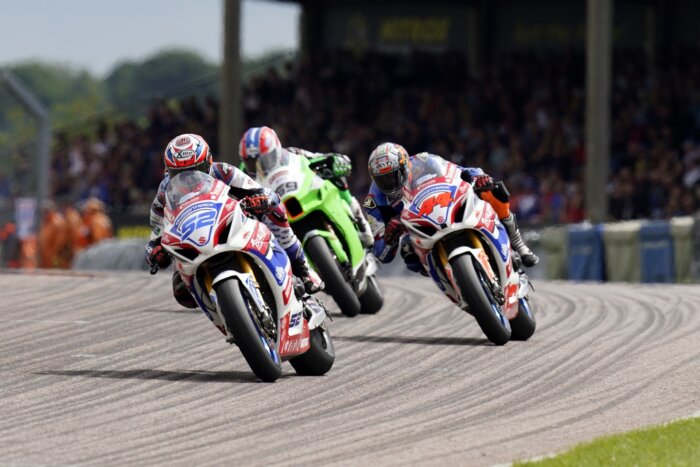 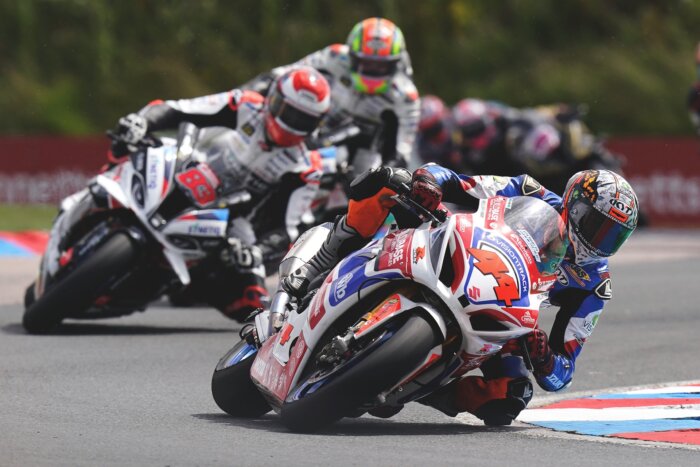 Gino Rea, on the second GSX-R1000R superbike, finished a solid eighth in Saturday’s sprint race, just half a second behind his teammate, highlighting the closeness of the field. On Sunday he finished 10th and 11th.

Gino Rea, “Saturday was a positive day. I started okay in the race but got into a battle with a couple of other riders. The group ahead managed to get away and I had to use a lot of tyres to bridge that gap. I think if we had those final couple of laps before the red flag, we could’ve picked one or two more riders off. It was a positive finish and my best result of the year so far, but it could have been a little bit higher.

“In that race, we worked the front tyre quite hard and made some changes for Sunday, and I didn’t quite have the same feeling to try and give the front an easier time, but that maybe affected the rear a bit more.

“Starting on the fifth row for the final race wasn’t ideal with the intermediate rear tyre, and I got swamped by the riders on wets, and I was just too slow in the opening laps. My mid-race pace was similar to the leading group but I was miles behind already and could only manage 11th. It’s a shame in what is usually strong conditions for me. But there are positives to take; my ideal lap times from each sector were good in all the races, I was able to move forward in all the races and our pace in the dry was similar to Danny’s so we know we can do the lap times. And on Saturday we were just over two seconds off the podium. I feel good on the bike and we’ll come back stronger at Donington where I had my best result of the season last year.

“Massive congratulations to Danny and the whole team though; everyone has worked hard for that result so it’s well deserved.”