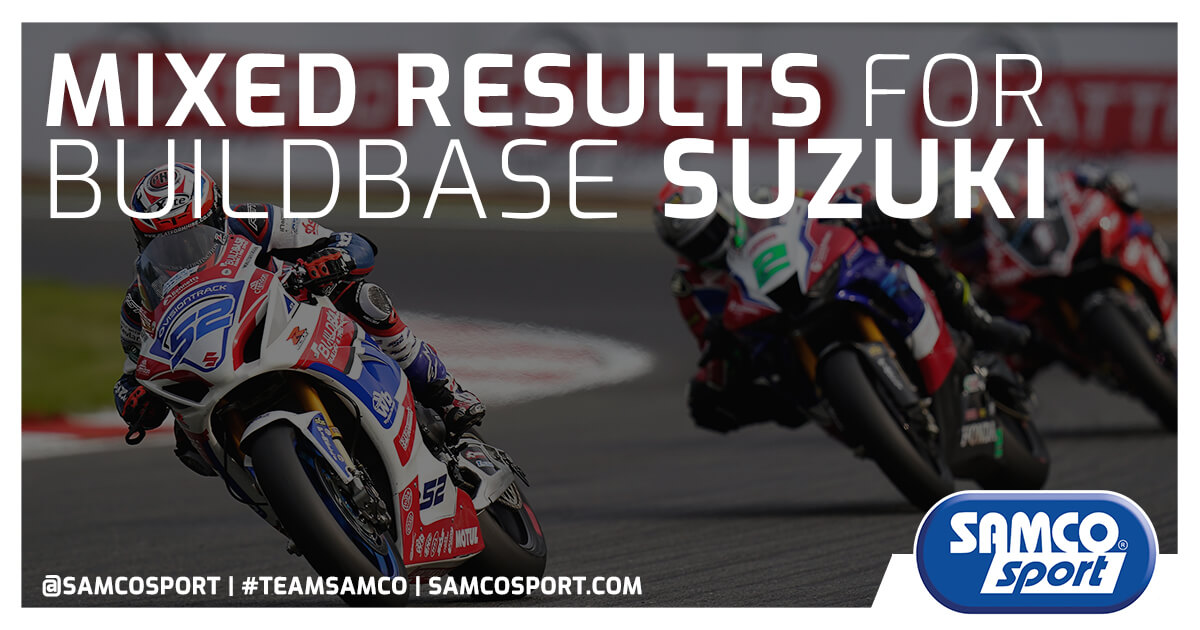 It was a mixed bag of results for Buildbase Suzuki at Brands Hatch for the third round of the Bennetts British Superbike Championship, as Danny Kent and Gino Rea claimed top-10 finishes, but mechanical issues also resulted in DNFs for the pair. National Superstock challenger Tim Neave carded two DNFs after being taken out of race one, rendering him unfit and unable to complete race two. 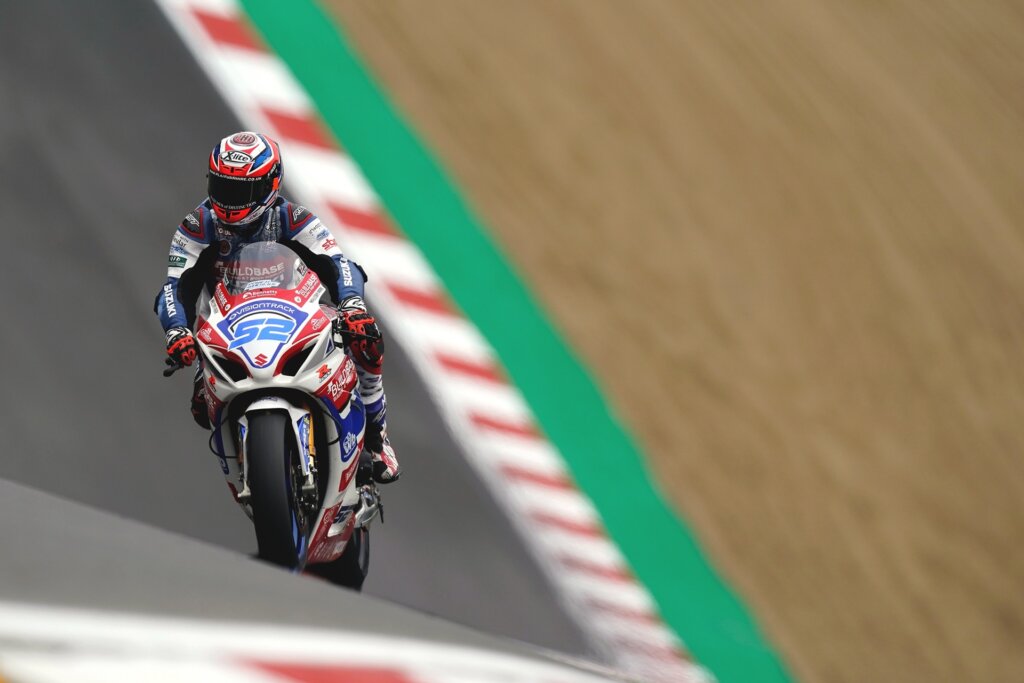 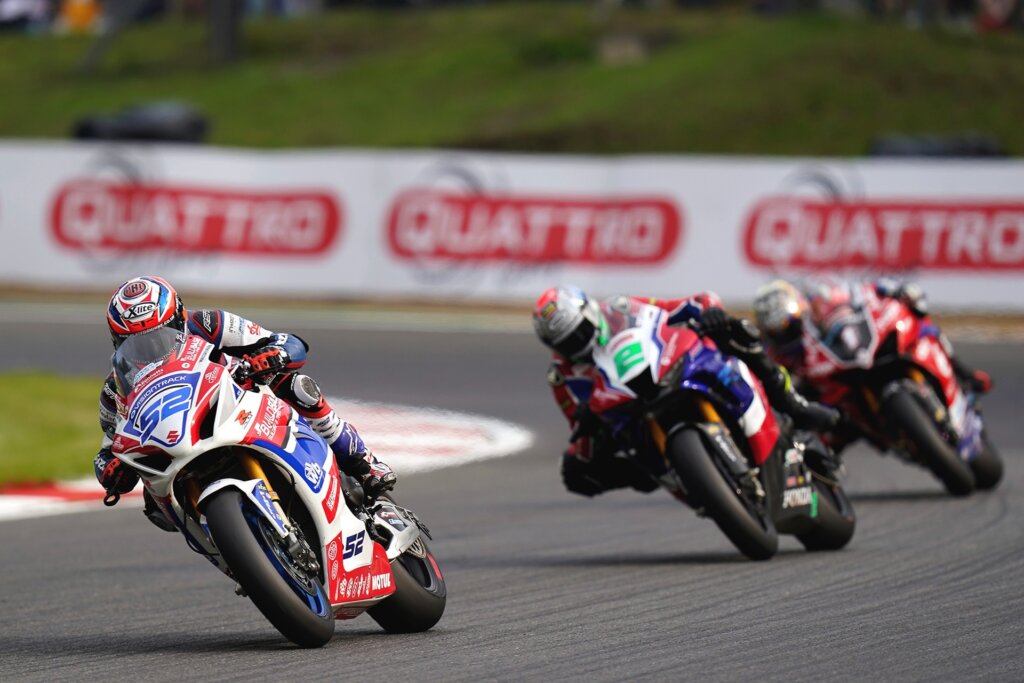 Kent was enjoying a much better weekend after a tricky start to his season and started Saturday’s Bike Social race from the third row of the grid. Fighting wheel-to-wheel with reigning champion Josh Brookes, he finished 10th.

An impressive start to race two saw him running in fourth place, but an issue with his front brakes sticking forced him to retire early. As a result he started down on the grid for the final race, which started in mixed conditions. Following a red flag he was again fighting inside the top-10 after the restart, and crossed the line 10th. 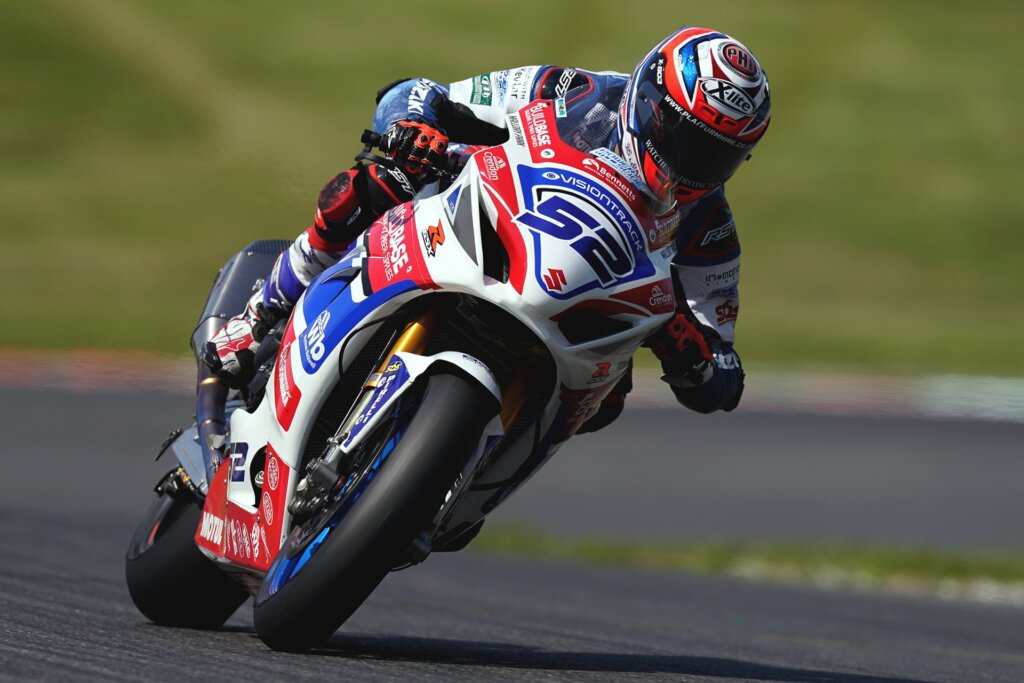 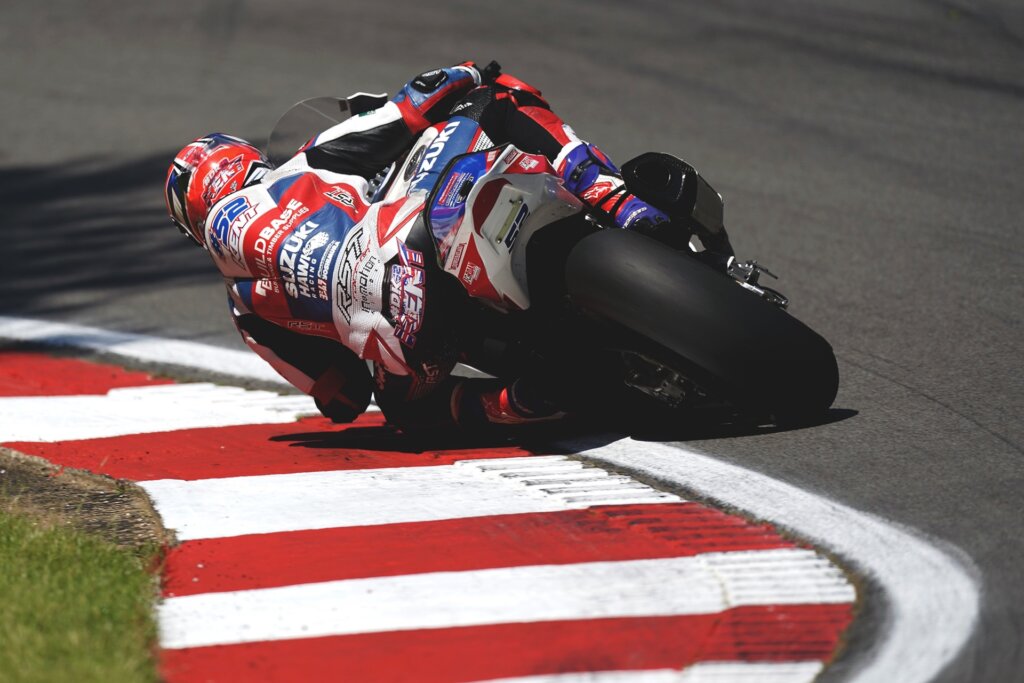 Danny Kent, “Compared to the opening two rounds, we’ve had a good weekend. 10th isn’t ideal or where we want to be but it’s a start. And we maybe could have had more from race two; I made a good start and got up to fourth but I had an issue with the front brake sticking, so after any little wheelie the front would lock as it came down. So it was obviously disappointing to have to pull out but I was feeling good. Unfortunately though it meant we started 17th in the last race as I pulled out on the second lap. I got up to 11th before the stoppage, and it was another 10th in the end which, from 17th, I was happy with.

“So all-in-all, it was a more positive weekend, I stayed on the bike which helped my confidence, and I’m quite optimistic for Thruxton. I’ve only ridden there once but I enjoyed it, I’m riding a bike that’s competitive, so I’m looking forward to it.” 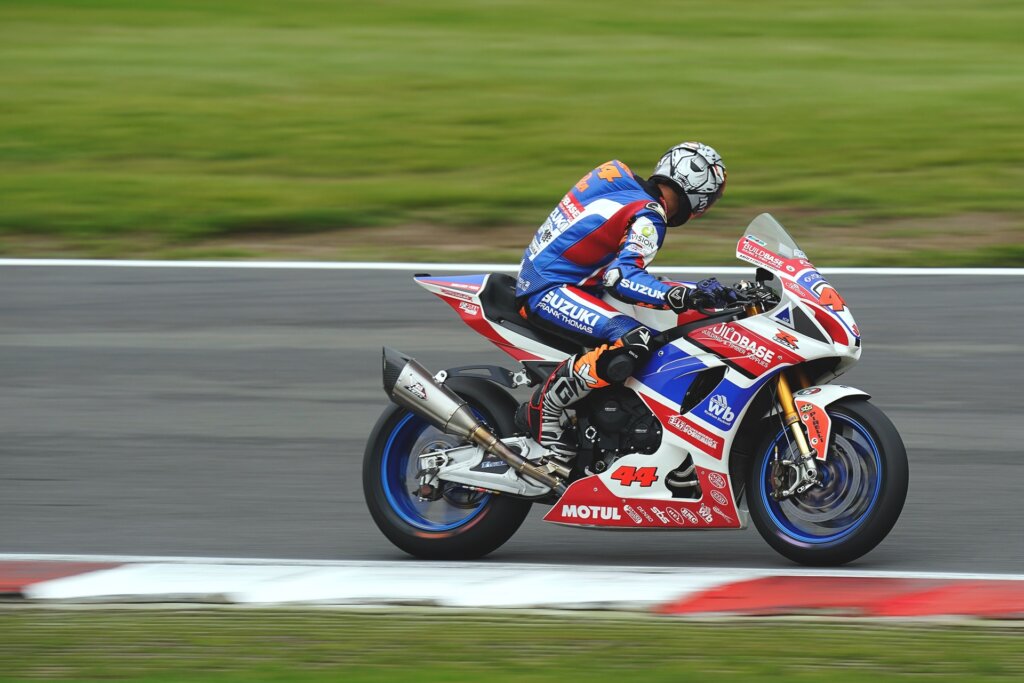 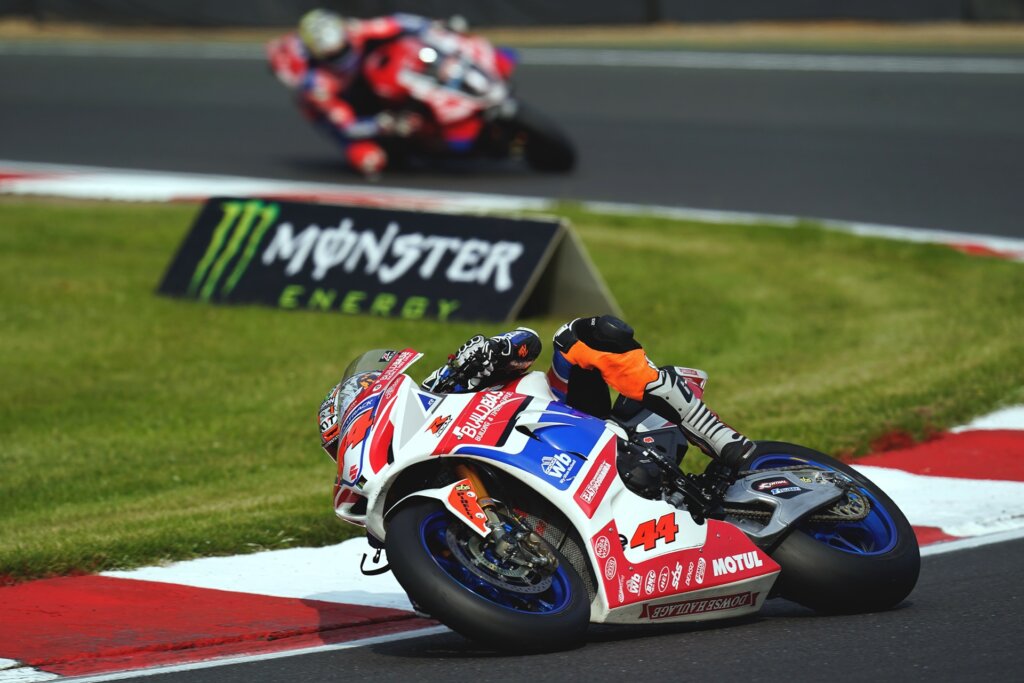 A rogue grip issue in race one on Saturday caused Rea to retire. He finished 10th in race two, but a mechanical failure of his GSX-R’s superbike-spec engine meant he also DNF’d in race three.

Gino Rea, “It’s been an up and down weekend, but that’s racing. We didn’t make any mistakes ourselves, just unlucky to come away with two DNFs. In race one I had a big slide out of Druids, for no real reason, and then had some vibrations from the rear, the sort of feeling like the tyre’s coming off the rim. I tried to stay out but it wasn’t going away and when you don’t know what it is it becomes a safety issue. In race three I felt the vibrations coming and got off the line as best as I could, but it’s a racing engine, it can happen.

“In between, in race two I made a good start – something we were able to do all weekend – and got away with the pack and the pace was quite good. I just suffered a bit mid-race as the grip drops off. When that happens the bike becomes quite difficult, quite physical, to ride and I struggle to keep it smooth. I was in ninth but got ran wide by [Peter] Hickman into turn one and couldn’t come back at him.

“Its’ disappointing but we’ve shown good pace, again. We’re able to set lap times to run inside the top 10, on Friday we were P7, our one-lap pace is good. We just can’t keep it up for race distance, which is something we need to work on. When conditions are right we can be competitive.” 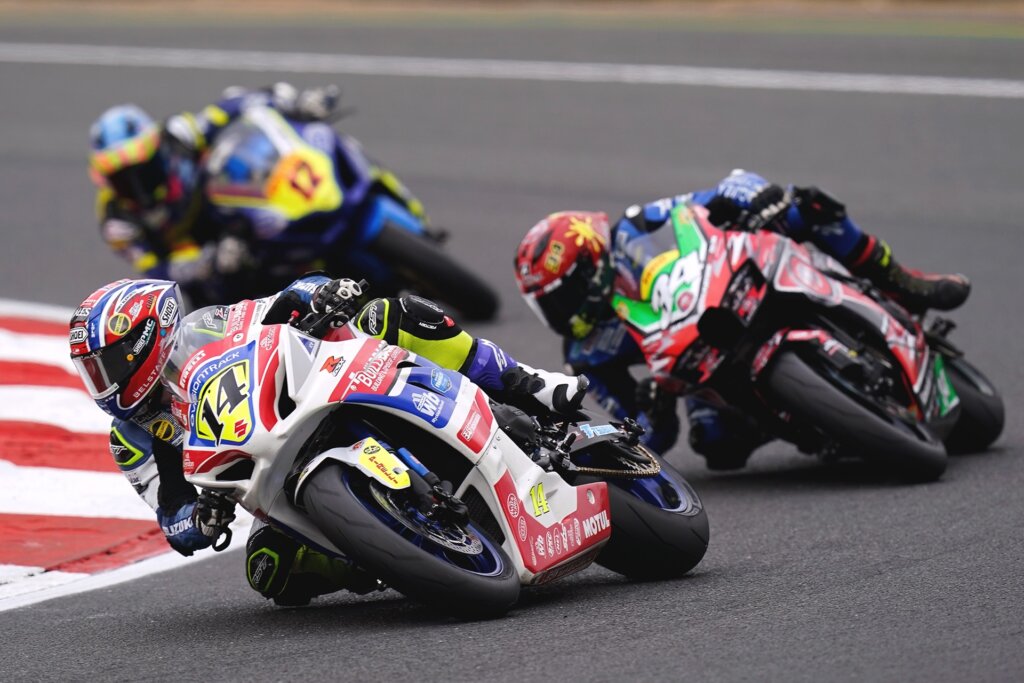 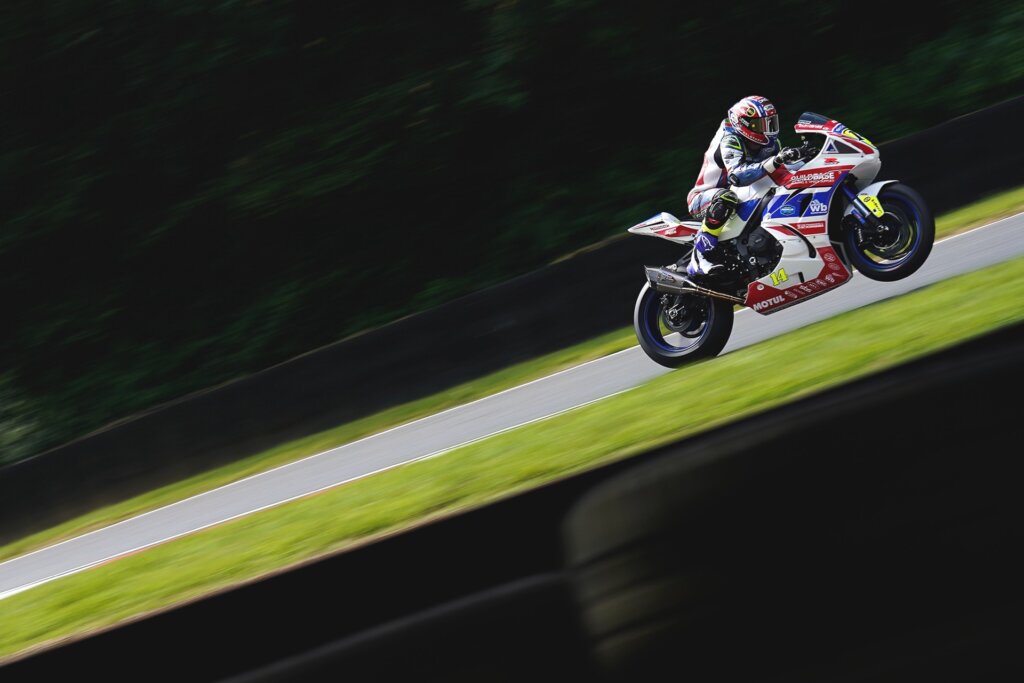 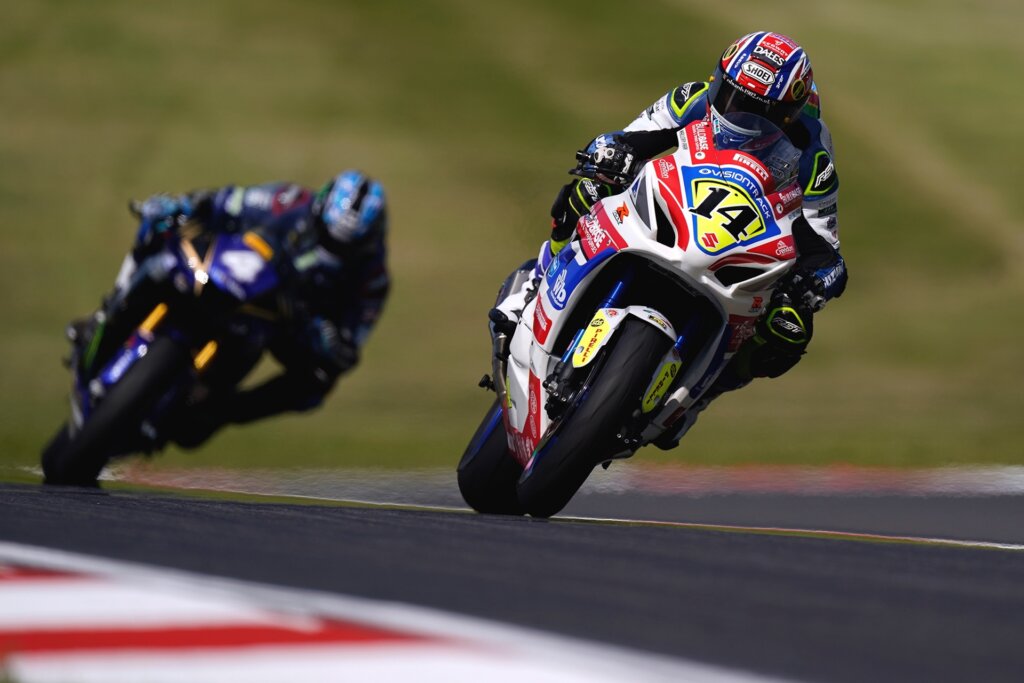 Tim Neave was embroiled in a thrilling last lap battle in the weekend’s opening Superstock 1000 race on Saturday. After a steady start to the race, as he struggled a little with the feeling from the front of his GSX-R, he was improving in the closing stages, but was taken out by another rider on the final lap. An injury to his shoulder meant a retirement from race two, as he struggled with the pain.

Tim Neave, “My shoulder’s in a bit of a mess to be honest. An x-ray showed no breaks but I’d bet on some ligament damage so I’ll be getting in scanned next week. I struggled a bit at the start of the race but it was coming to me and we were in a pretty good battle in the last few laps and it was good fun, but I’m disappointed in the move, I can’t lie. And I knew today was going to be a struggle. I tried to race but I couldn’t hang onto the bike. Warm up was okay in the damp conditions but in the dry, having to attack the corners and really hang onto the thing, it was really painful. It’s done my championship any good, so I’ll have to put that to the side and go round-by-round now, and hope I’m in better shape for Thruxton.”