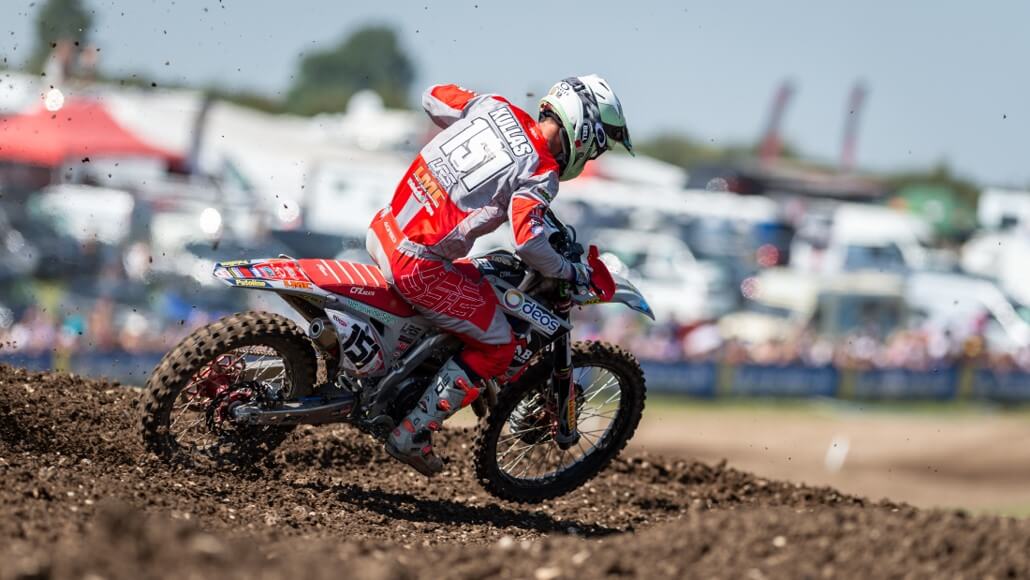 Coming into round five of the MX Nationals, Harri Kullas held a 42 point lead over second place man, Lewis Tombs.

Coming into round five of the MX Nationals, Harri Kullas held a 42 point lead over second place man, Lewis Tombs. Harri had 6 race wins in a row on his Honda CRF450R at the first three rounds, before riding through the pain barrier at round four to score 23 valuable points. We were confident of a good result here with a fully fit Harri. The track was in prime condition, the weather was amazing and after watching the UK’s first ever Straight Rhythm event at the track on Saturday evening, we were looking forward to race day on Sunday.

Qualifying – Harri looked comfortable on track and posted the fastest time early on, then improved it a few laps later to take pole position from Elliot Banks-Browne.

Race One – Harri had a good start on his Honda CRF450R, holding second place in the first few corners, behind Lewis Tombs. Then a slight mistake on lap one allowed Elliot Banks-Browne past and pushed Harri to third. Banks-Browne moved to the lead on lap two and edged away, as Harri took a few more laps to pass Tombs and move into second place. By now Banks-Browne had moved 8 seconds or so away and Harri edged closer, but not close enough to challenge for the win, finishing 4 seconds off the race winner.

Race Two – Going into race two, we knew we had to finish 6 points or more in front of Lewis Tombs to win the championship, so there was a lot of nervous pacing going on! Thankfully another good start for Harri in second place, this time behind Jake Shipton, who Harri past towards the end of lap one for the lead. Tombs had a first turn incident and was last on lap one with lots of work to do. Harri never looked back though and did what he had to do, winning comfortably from Shipton. Tombs got back to 6th place but it wasn’t enough to stop Harri winning the Michelin MX Nationals Pro MX1 series, as he crossed the line in first place to be greeted by an elated team, winning our first ever Pro championship.

Harri’s championship win means a a Honda CRF450R mounted rider has won MX Nationals Pro MX1 for the third year in a row, with Jake Nicholls in 2018 and Graham Irwin in 2017.

Harri now leads by 54 points, wining the championship with one round remaining. What a fantastic weekend!

Congratulations to Harri and the whole team from Samco Sport.